Make disciples of Jesus Christ for the transformation of the world. 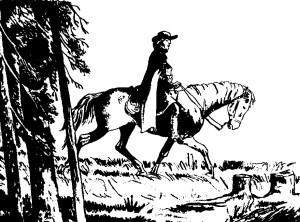 Methodism had its origin in a Christian College in Oxford, England, in the year 1737. Methodism came to America in the year 1766, and during Christmas of 1784 the Methodist Episcopal Church in America was organized at Baltimore, Maryland. Methodism has grown from a membership of some 15,000 at that time to some ten million as of today.

In the early 1800’s, “circuit riders” traveled by horseback, planting Methodist societies in each of the new territories. Soon after Delaware County, Indiana was organized in 1827, itinerant missionaries began to appear in Muncietown. It was recorded that the first sermon preached here was by a Methodist missionary as was the first marriage performed in 1829. The church started as a group of Methodist societies, but soon they developed into smaller classes with a local leader providing direction during the absence of the circuit rider.

The Muncietown Methodist Circuit was formed in 1836. On December 24 of that year, the first Quarterly Conference of the Muncietown Circuit was held in the courthouse, which stood on High Street, opposite the public square. This is also the birth date of that congregation. By 1838, the membership had increased considerably, and the followers of Methodism felt the need for a building designed especially for worship. 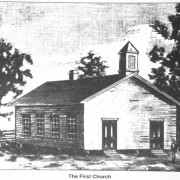 The total annual budget was $435 including the pastors salary. At that time the population of Muncietown was 250. The Muncietown Sunday School Union was organized about 1840, with classes held on Sunday afternoons, 3 o’clock to 5 o’clock pm.

As the population of Muncietown increased, so did the membership of the Meeting House. By 1851, there were over 200 members. The need for a larger building was later realized and presented to the Quarterly Conference of February 1853. Approval was given and plans were begun for the construction of a new 45×75 feet brick church building that was later named “Simpson Chapel.” The building was completed and dedicated in 1856. 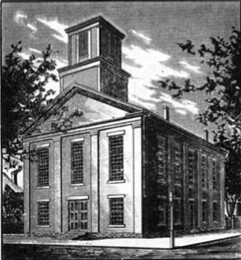 On the northwest corner of Jackson and Mulberry Streets, the new church was constructed at a cost of $4,647.80 an enormous amount of money in those days. The size of Simpson Chapel was adequate for its 352 members, a rather large percentage of the 1,500 people living in Muncie in July 1856.

There was some disagreement during the 1850’s between the “conservatives,” who hated to give up old customs, and the “radicals” or “progressives,” who were enthusiastic about new ideas and new ways of doing things. Some of the Methodist ministers dared to be progressive in spite of some conservative protests against such innovations as church organs and choir singing.

The discovery of natural gas in 1886 caused a rapid increase in the population of Muncie. In the town of 14,000, many of the manufacturers, working people, and their families chose to worship in Simpson Chapel. The congregation grew to such an extent that on September 10, 1887, exactly 31 years after Simpson Chapel had been dedicated, a decision was made to construct a new building. Two lots on the corner of High and Adams Streets were purchased and the cornerstone for a new 77 1/2 x 112 1/2 feet church costing $32,000 was laid July 4, 1888. 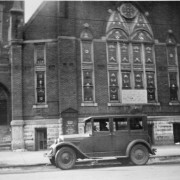 On June 2 1889, the new High Street Methodist Episcopal Church on the corner of High and Adams Streets was dedicated. The church was filled to its capacity of 1,500 people for the service. The red brick structure, with sandstone trimming, was further described as “the most commodious and beautiful building within the conference.”

In 1904, the front doors of the church were changed to swing out instead of in. This decision had a symbolic significance, representing the programs and ministries of High Street Church. The doors were mentioned again in the 1930 building dedication program: “… our doors will swing wide in invitation to all who pass by…”

The steady church growth required more space to meet the needs of the congregation. In 1919, some members began to suggest building a new church instead of spending money on expansion of the overcrowded facility. Once again, the High Street membership of 1,504 was outgrowing its facilities.

The depression years brought new financial challenges to High Street Church. At a time when everyone faced money problems, there was a campaign to raise funds for the new church building. The May Breakfast, an annual tradition of the High Street women, was probably started as part of the fund-raising activities for the 1930 building project.

After World War I, and an improvement in the economy, the church Board of Trustees in 1926 recommended to the Quarterly Conference that the church adopt a definite building plan for the future. The purchase of the needed land for a new building was approved by the Conference in 1928. Since the new building would occupy the present site plus adjoining lots, arrangements were made to hold Services in the Central High School Building across the street, during the reconstruction period. 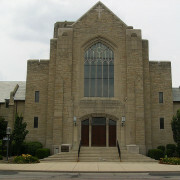 In 1928, the pastor of High Street Church was sent to Europe to study church architecture. He brought back data and pictures that led to the choice of a Gothic structure patterned after the 12th, 13th, and 14th-century European religious architecture. There were eighty-five rooms. The 110-foot Gothic Tower was considered to be one of the most outstanding in the state. The interior of the Sanctuary was carefully planned. The long, vertical lines and majestic, pointed arches of the Gothic style were used to lift the eyes and the spirit of the worshiper toward God. The intricate carvings and exquisite stained-glass windows were carefully selected to symbolize the beginnings of Christianity.

Church furnishings, given as memorials, included the organ, pulpit, baptismal font, and the communion rail. The organ chosen was considered by the Skinner Organ Company to be the finest they had installed in this section of the country. Dedication services for the new church were held the week of October 5-12, 1930. 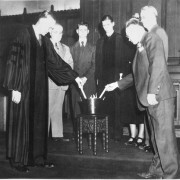 The year 1939 was significant in the history of Methodism. The Methodist Protestant, Methodist Episcopal, and Methodist Episcopal Church South united to form one body, following many years of negotiation. The beautiful church on High and Adams became High Street Methodist Church.
A mortgage-burning celebration and ceremony took place on May 22, 1949. The senior minister said, “Now we are free of debt, owing no man a thing. Our only debt is to God.” Many services of the church, throughout the years, were made possible only through donations of its members – donations of money, supplies, and time. The lighted tower in the heart of the city welcomed many to the church with doors wide open for worship, fellowship, and service.

In 1968, the Methodist Church merged with the Evangelical United Brethren Church. As a result, the sandstone church became known as “High Street United Methodist Church.” Additional property surrounding the church was purchased in 1971 and 1972 to be used as parking space. 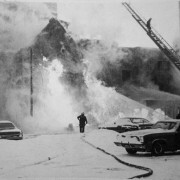 On January 27, 1978, the third day of a severe blizzard, an explosion blew off the front doors and roof of the church, shattered stained glass windows and caused extensive damage to the interior of the Sanctuary and the educational building. Some church members, upon hearing the news on the radio, came through the blizzard by snowmobile or whatever means of transportation they could find, to help rescue the furnishings and valuable items that would be ruined by the weather. At a congregational meeting, it was unanimously voted to start immediately to restore the High Street Church building. Since no cost estimate was available, the decision to rebuild the church was a step of faith. A new sense of unity developed among the members as they met on Sunday mornings at Muncie Central High School for church school, followed by a single hour of worship.

Maundy Thursday of 1978 was a memorable experience for High Street members. The congregation had no place to meet for this important Holy Day. The Jewish community expressed a brotherly concern by opening its facilities for what became a deeply spiritual experience for the members who crowded into the Temple Beth El that Holy Week night. An impromptu Christmas Eve service in the half-finished Sanctuary in December 1978 marked a memorable Christmas Eve in the history of High Street Methodism.

In a special congregational meeting on “Remembrance Sunday,” one year after the explosion, it was announced that the congregation had experienced some surprising growth during the “year of exile.” Sunday worship attendance had actually increased, as had the number of small group studies. In an open letter to the Muncie community, the senior pastor stated, “… and because of this experience of community support, we pledge to you to increase the use of our facility to the general welfare of the community whenever it is needed.” 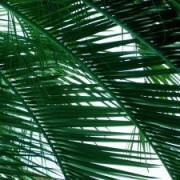 At a special Palm Sunday service on April 4, 1982, High Street Church once again had a mortgage-burning ceremony. The parking lots of High Street Church continued to be filled evening after evening, as people from Muncie and outlying areas came to participate in the various ministries that had been designed to meet their needs.

In summary, the past 150+ years have brought poverty and prosperity, tragedy and joy, despair and hope to the little congregation that outgrew three different church buildings and nearly lost a fourth. With such a rich heritage and ministry, the congregation and those that follow have a great tradition to uphold.

On Christmas Eve, 2011, High Street Church observed its “birthday” with special services commemorating the little gathering in the courthouse which had formed the congregation 175 years earlier.  Many other unusual events throughout 2011 celebrated the church’s anniversarial year, including a visit from “John Wesley” (Rev. Bert Kite), church dinners, a homecoming picnic honoring former pastors, guest preaching, and numerous musical offerings and programs by the church’s organist, its handbell choir, children’s and adult choirs, its orchestra, the praise team, and various community groups and ensembles.

These distinctive events culminated on December 18 in the visit of Indiana Bishop Michael Coyner who preached and was presented with musical offerings, including the premiere of Robinson McClellan’s “Psalm 71: The Generations.”   Commissioned by the church specifically for this occasion, the anthem featured an intergenerational choir.